These Snickerdoodle Cupcakes are a cinnamon lover's dream come true! They have a cinnamon cupcake base, a cinnamon sugar swirl and topped with cinnamon brown sugar buttercream. In addition, they are gluten free, nut free, egg free and can easily be made vegan!

Every single part of these cupcakes contains cinnamon.

She loves them so much. She seriously eats them for snack or dessert every single day!

So when I was trying to think up new cupcake flavors to try, she said let's make Snickerdoodle Cupcakes with a cinnamon swirl!

She always has the greatest ideas. She's my number one idea person. Why didn't I think of this idea?!

Anyway, that is how we came up with these awesome cupcakes. It was even her idea to make the buttercream have both brown sugar and cinnamon.

You would think all this cinnamon is overpowering but it truly isn't!

If cinnamon is also your thing, you are going to love love LOVE these cupcakes.

Can these cupcakes be vegan?

Yes! Follow these simple steps to ensure they are vegan:

Cinnamon deliciousness in every single bite, these gluten free, nut free, egg free, easily vegan Snickerdoodle Cupcakes are a must try for those of you who adore cinnamon! Enjoy! 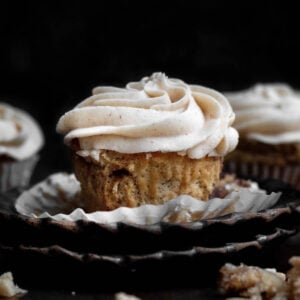 For the cinnamon sugar swirl: