If you’ve been following along for a while, you will know I’ve said before that whoopie pies are not something I ever had growing up.

In fact, I never even had them at all until recently. I cannot believe what I’ve been missing! They’re delicious and I want to make them in every flavor imaginable.

Haha. Ok with that said, let’s talk about these Red Velvet Whoopie Pies with Vegan Raspberry Buttercream Filling. Since red velvet has that slight chocolate flavor and tang, the raspberry filling works perfectly.They’re super simple to make; it is basically combining the wet and dry ingredients.

The only part that gets a little tricky is placing them on the baking sheet....

A 1 inch cookie scoop works best but you could use two tablespoons if you don’t have the scoop. I say two because this batter is fairly sticky and you’ll need a second spoon to help it out onto the parchment lined baking sheet.

One of the things I’ve noticed with some gluten free flours is that a lot of times they will bake exactly the way you left them. So if you scoop the batter onto the sheet and it looks like a misshapen blob, that is the way it will look when it’s done being baked.

So one step that is crucial to Whoopie Pies, since you want them to be a perfect dome, is shaping the raw batter into a dome once it is on the baking sheet.

The best way to do this is with clean fingers that have been sprinkled with water. You don’t want your fingers dripping wet but you don’t want them dry because the batter will just stick to them.

With slightly wet fingers, gently press down and around on the domes. You want to make sure they look like actual little domes and that they’re all smooth.

Mind that bake time with the Red Velvet Whoopie Pies

Once you’ve done this to all the little domes on your baking sheet, pop them in the oven and bake for 16-17 minutes.

You want to make sure you don’t take them out too early. If you do, the domes collapse and you end up with what looks like a bunch of shriveled raisins. They’d still taste fine but they’re just not super attractive to look at.After you take them out of the oven, let them sit on the baking sheet until they are cool. If you try to take them off too soon, you’ll end up with a giant mess.

Now for the Vegan Raspberry Filling

While the pies are cooling you can make the filling.

Yes you need to use your stovetop to liquify the frozen raspberries, but it really only takes about 5 minutes for that to happen.

Make sure you do use a strainer or a colander after because you don’t want any seeds in your filling. You want a nice creamy texture. Mix that tablespoon of seedless liquid into the filling ingredients. You’ll get a gorgeous pink hue with a slight raspberry flavor.

They’re gluten free, egg free and nut free! They can easily be dairy free (vegan) by using a dairy free gluten free flour, a non dairy milk of choice in the batter and vegan baking sticks. Celiac and allergy friendly and you’d never know it. Enjoy! 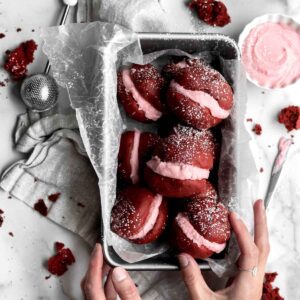 For the Whoopie Pies: