Sometimes simple is best. This No Churn Cinnamon Swirl Ice Cream is just that. It doesn’t need any fancy toppings...it’s perfect just as it is. A vanilla ice cream base infused with a luscious cinnamon caramel swirl. It’s gluten free, egg free, nut free and no churn, which means it’s super easy to make...no ice cream maker needed!

I absolutely love no churn ice cream recipes. Even though I have an ice cream maker and love to use it, sometimes I just want to make ice cream without it.

This recipe is so simple to make but I do have a few tips to help you.

The vanilla you use matters.

When making vanilla ice cream, whether it is no churn or made with a machine...the type of vanilla extract you use is very important.

Make sure you’re using a gluten free and nut safe pure vanilla extract from a brand you trust.

In my younger days, before kids, I tried making vanilla ice cream with a cheap vanilla and let me tell you. It tasted like chemicals.

The recipe uses light corn syrup. Some of you asked if you can use other options instead of corn syrup.

After some research, it seems like corn syrup is the way to go. It prevents the caramel from crystallizing which is important in this recipe.

Pop it in the freezer overnight before serving.

No churn ice cream is amazing but it’s super soft so it needs to freeze for quite a while prior to serving. Unlike ice cream from an ice cream machine that only needs about two hours in the freezer after making, no churn needs to be in there overnight to solidify.

With that said, when you take your ice cream out to serve...don’t leave it on the counter too long, otherwise it will be a soupy mess. No churn does melt very very quickly.

Ok guys that’s it for tips! The recipe is super delicious. I ended up combining two recipes from The Food Network to make this and it came out perfectly. 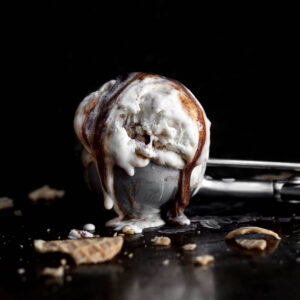 For the vanilla ice cream:

For the cinnamon swirl: